Code, docs, and tests: what's in the General registry?

Julia users like to think the programming language they love is easy to use and as such it can promote good programming practices, like writing documentation, testing the code and using continuous integration (CI). But... is that true? In order to try and answer this question and get more insights about the Julia ecosystem we developed a package called PackageAnalyzer.jl and over a 2-month period leading up to JuliaCon 2021 we used it to make a survey of the packages in the General registry. In this post we summarize the main findings we presented in our JuliaCon 2021 talk, which we recommend to watch for more details.

Lines of code in General

The following chart shows the distribution of packages by number of lines of code, in semi-log scale: we can observe that the packages follow a log-normal distribution, with a median of 507 lines. 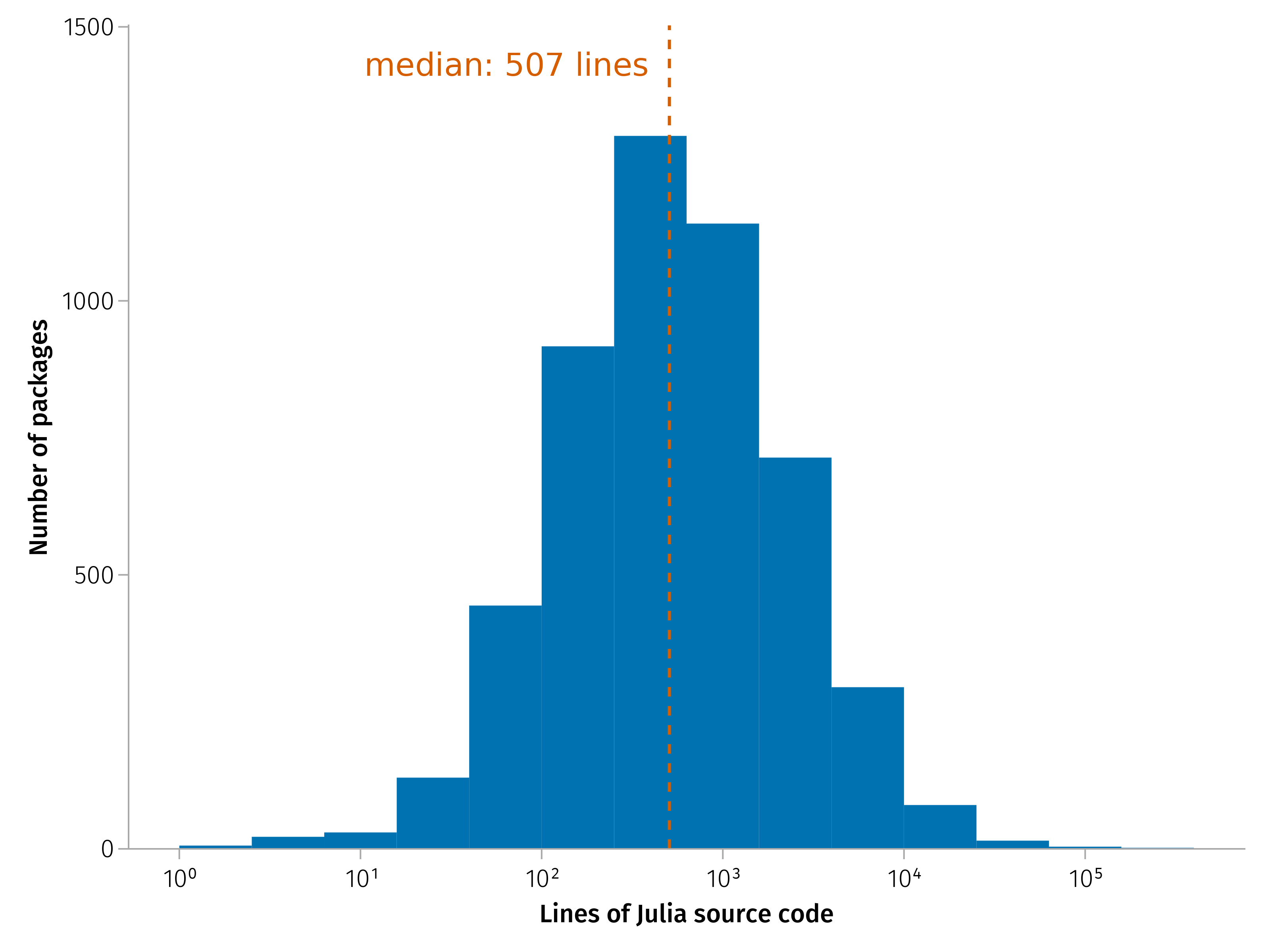 We also used WordCloud.jl to create a word cloud of the packages in the General registry by number of lines and code. 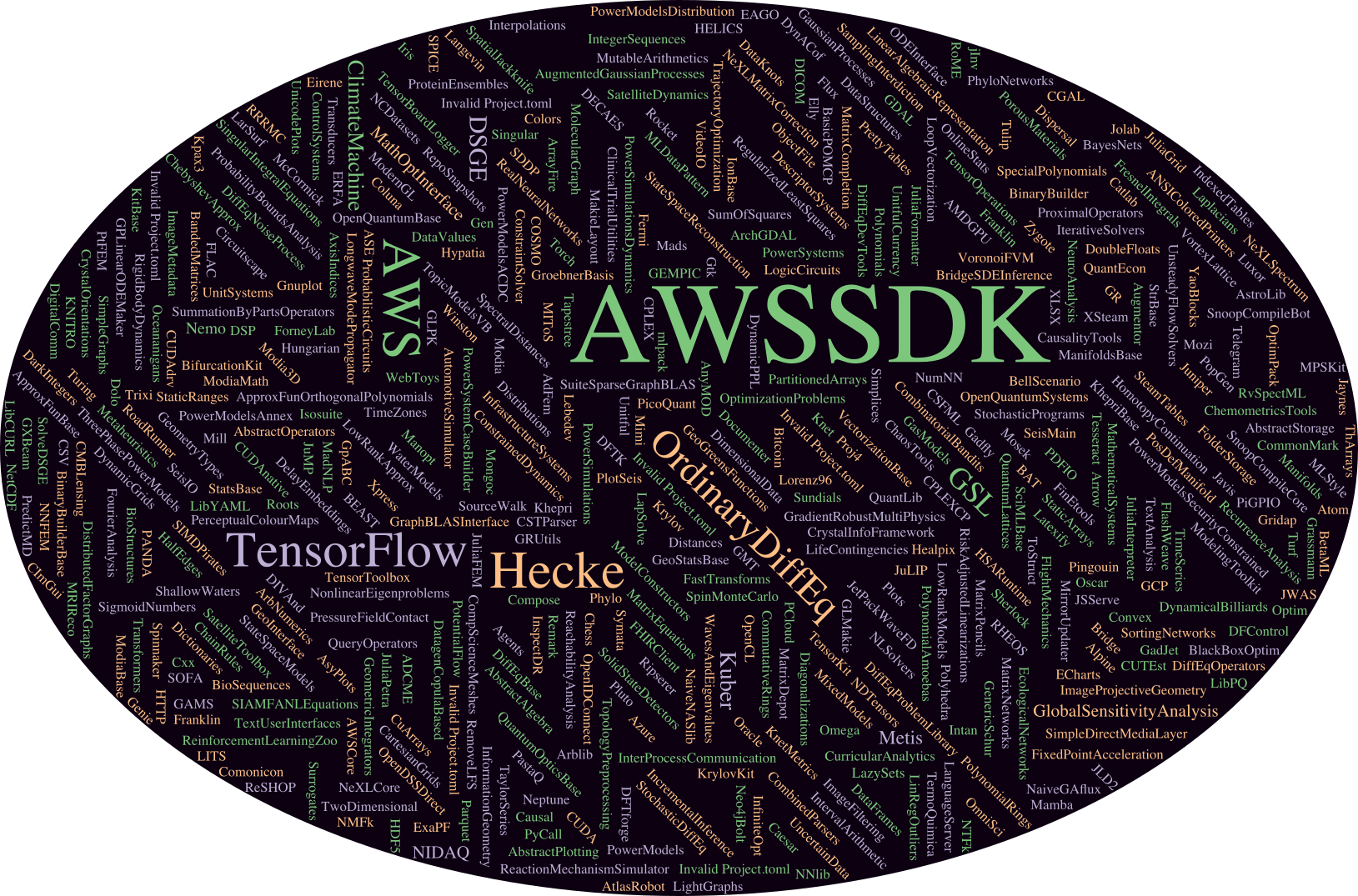 The following table shows the 14 largest packages in the registry, by number of lines of code in their src directories. We should note that many of these packages have their source code automatically generated from the API of the external libraries or web services they wrap.

This chart shows the distributions of languages used in the files present in the src directories of packages: it was probably easy to guess that the most popular language is Julia itself, by a very large factor, followed by Javascript, JSON and Fortran. However note that these figures don't capture packages wrapping binary libraries using the so-called JLL packages, as they would automatically download pre-built copies of such libraries, without the need to vendor their source code. 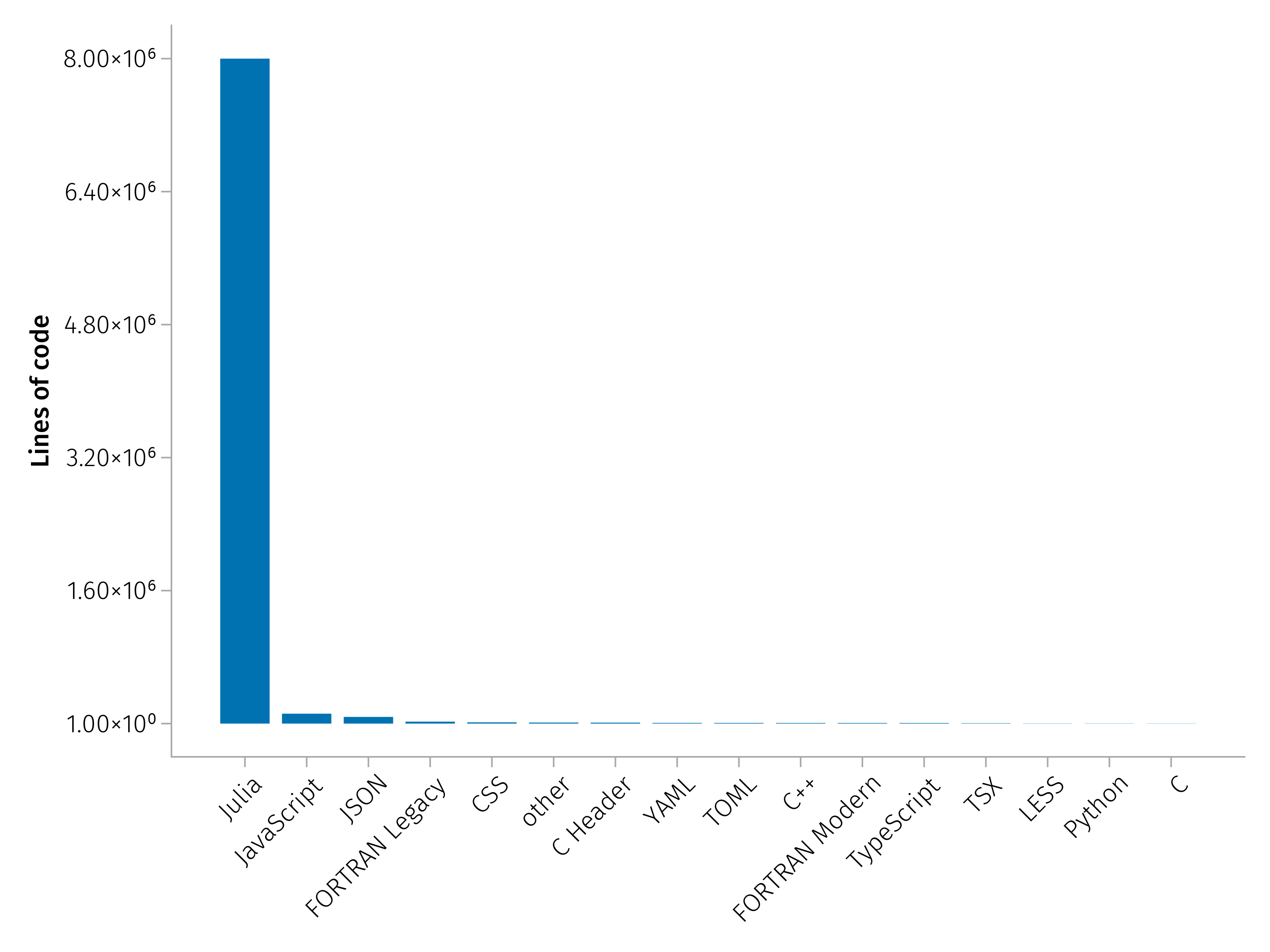 While over 96% of packages in the General registry have licenses approved by the Open Source Initiative (OSI), about 200 packages appear to not have any license at all, while 20 have a license which isn't automatically detected as OSI-approved. 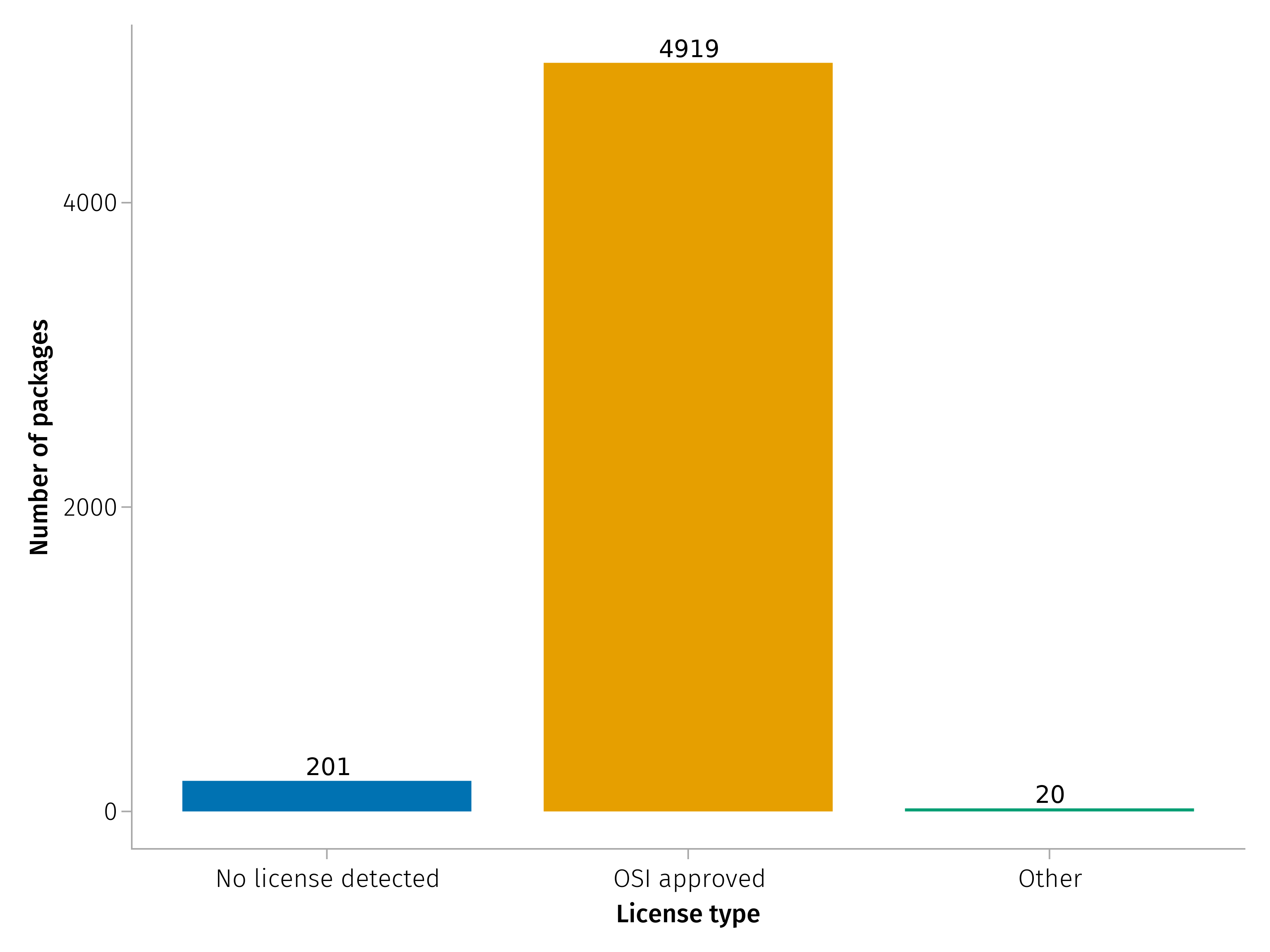 Julia's public package registries have long required OSI-approved licenses (stretching back to October 2015), but this requirement was not documented in the General registry README for some time, and has only been automatically enforced since last March. Now, any new package or new version of an already-registered package must have an auto-detected OSI-approved license to get automatic approval for merging into General. Since the introduction of this automated check, the fraction of packages with OSI-approved license has been steadily increasing. 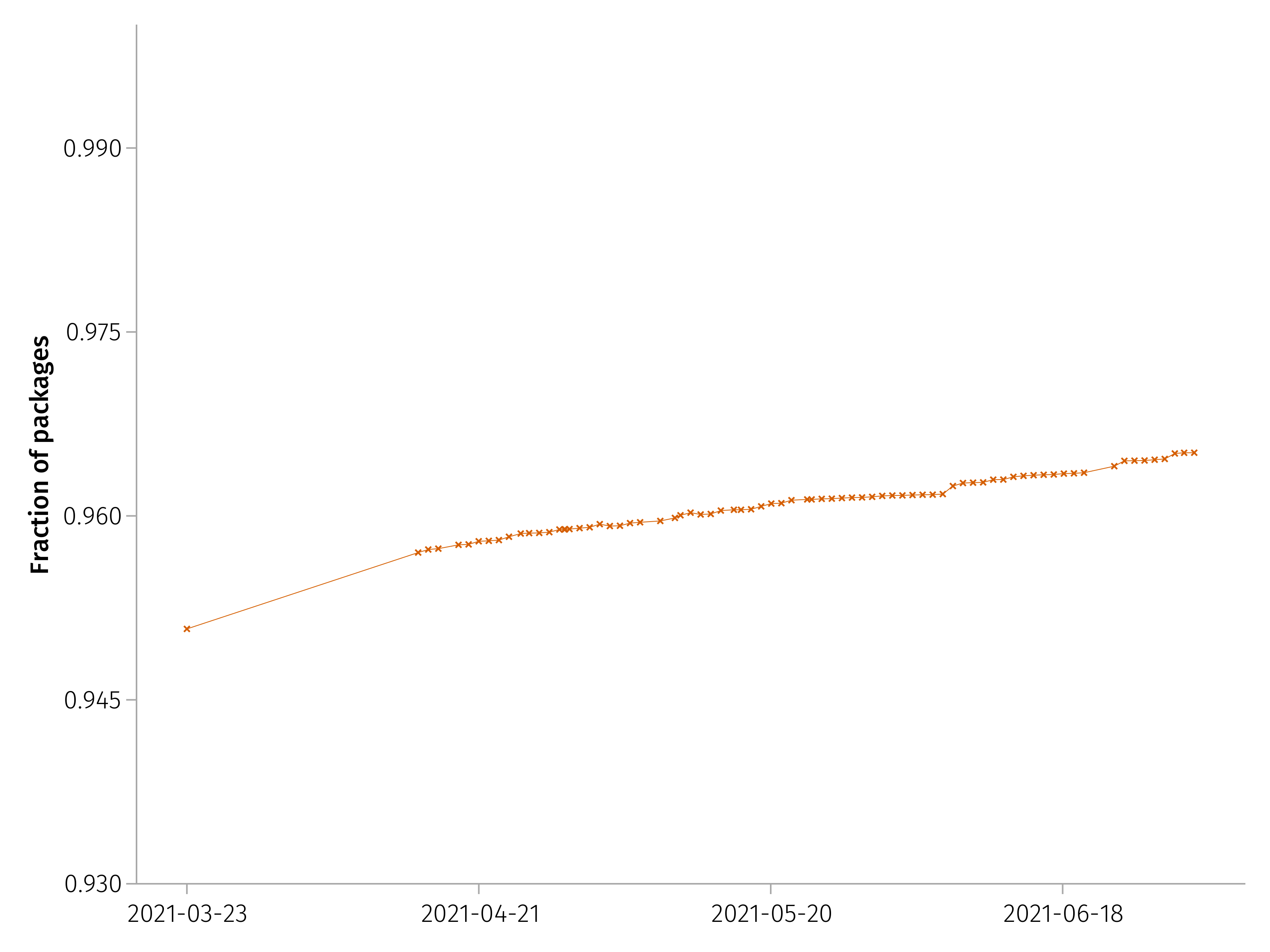 The MIT "Expat" license is by far the most popular in the Julia ecosystem, likely due to the fact it's the license adopted by the source code of Julia itself. Other popular licenses include GPL (v3 or v3 and any later versions), Apache 2.0 and the 3-clause BSD. 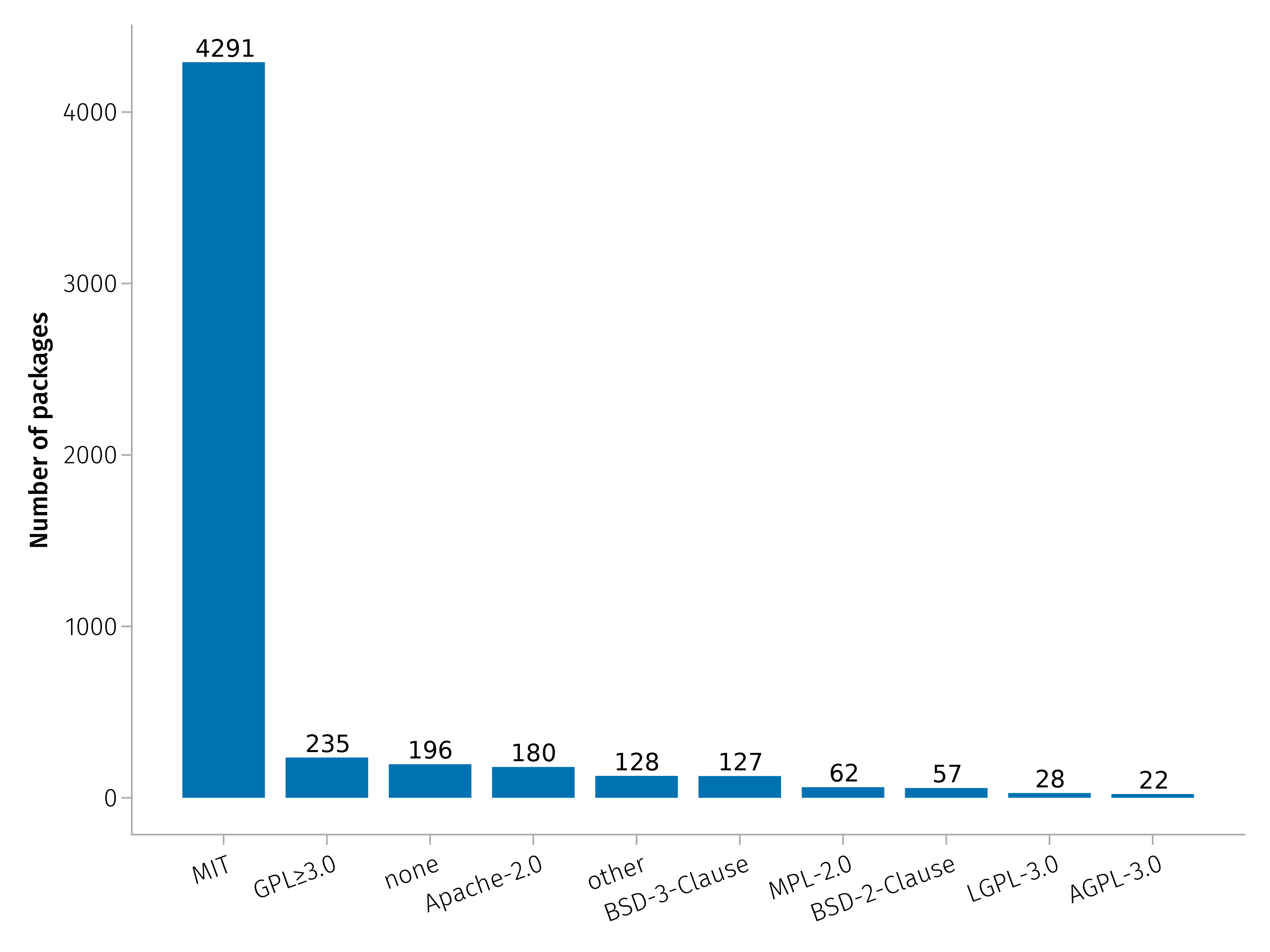 If you want to let other people use your package, you likely want to document it! This usually comes in the form of some paragraphs in the README file, or a dedicated manual written with the tools available to Julia users (e.g. Documenter.jl). About 88% of the packages in General have either 20 lines in the README file or proper documentation. 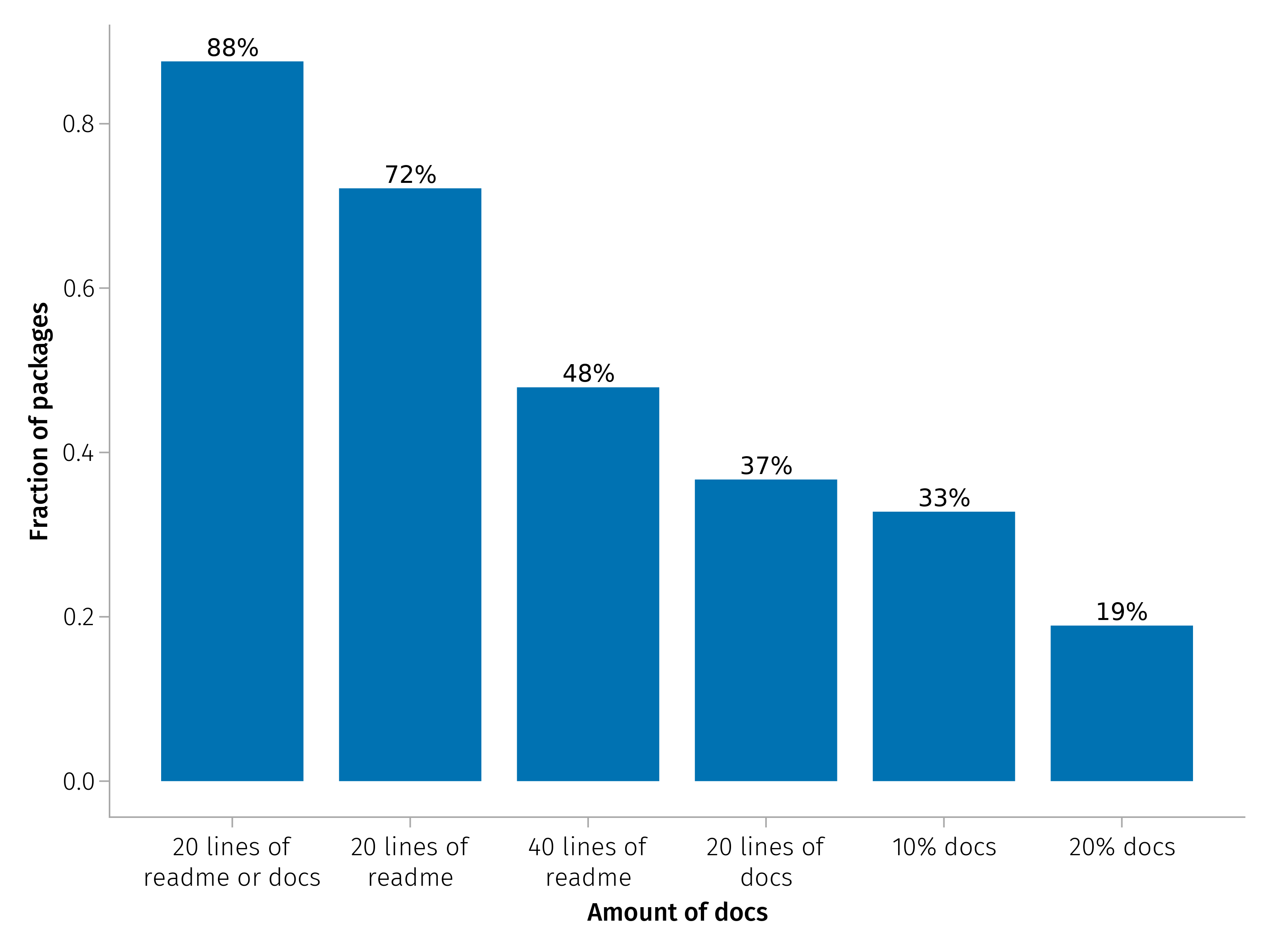 The following chart shows the distribution of the percentage of docs in the codebase of the repository, by computing the fraction of lines of code in the docs directory over the total number of lines of code in the docs and src directories. Less than 50% of the packages have Documenter.jl-based documentation in their repository. Does this mean over half of Julia packages are not documented? Not necessarily: authors of very simple packages may consider the README enough to describe the use of their package. This may also correlate with the fact that the majority of packages are relatively short (no more than ~500 lines of code including docstrings). Additionally, in some cases the source code of the documentation may be hosted in a different repository, which wouldn't be counted here. 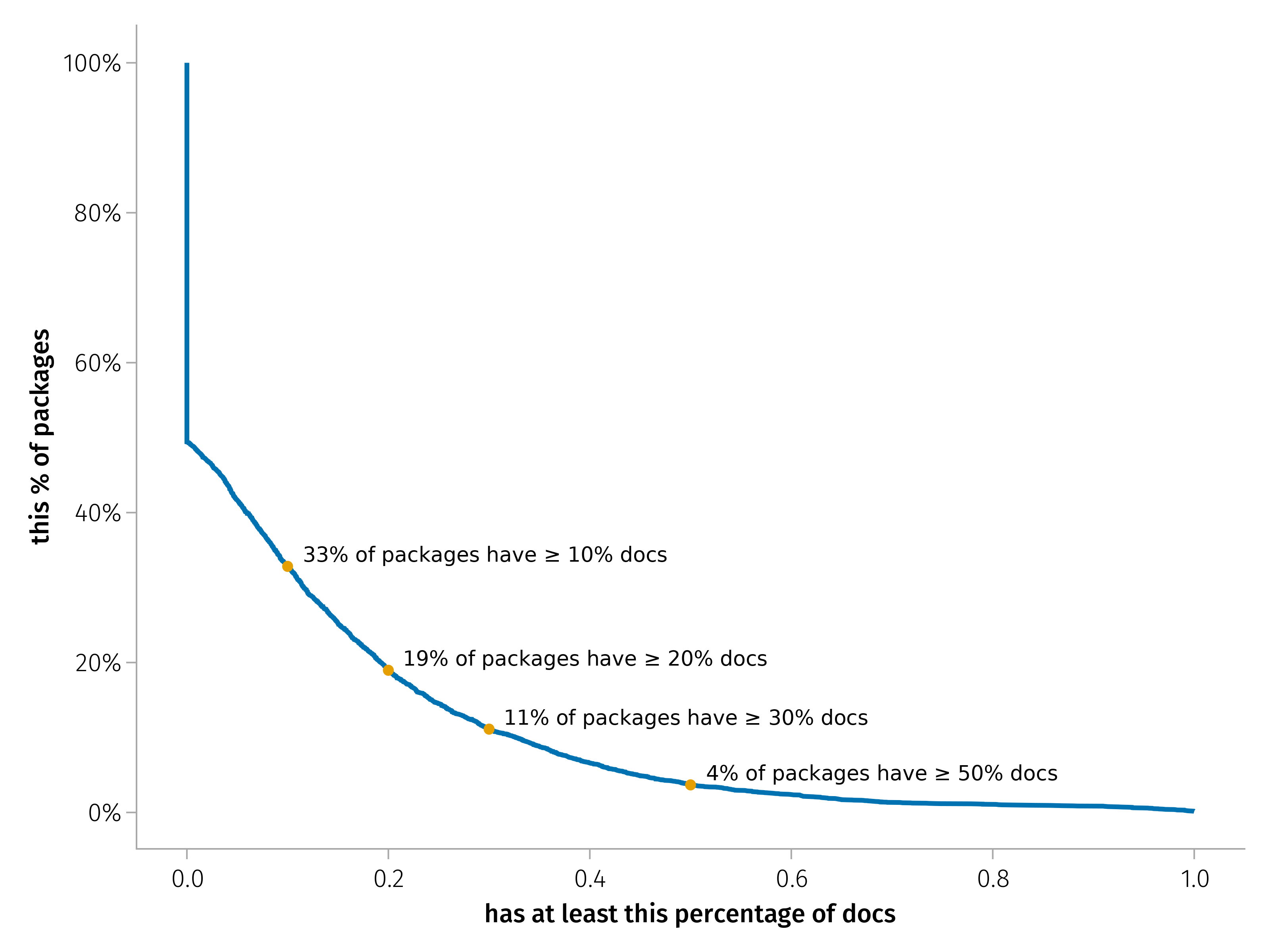 Testing is another important programming practice: it lets make sure the code behave as expected and that bugs that have been fixed once aren't reintroduced by later changes. Julia comes with the Test standard library. Likely the fact that Julia comes with a built-in unit testing framework encourages users to test their packages: over 96% of packages in the General registry have the test/runtests.jl file, which is the entry point for running the tests with Julia's the package manager. If we consider only packages with at least 10 lines of code in the test directory, to make sure we exclude simple auto-generated files with no actual tests, the fraction goes down to 89%. In the following chart, the percentages ("10% tests", and "20% tests") mean the number of lines of Julia code in test compared to the number of lines of Julia code in src plus test. 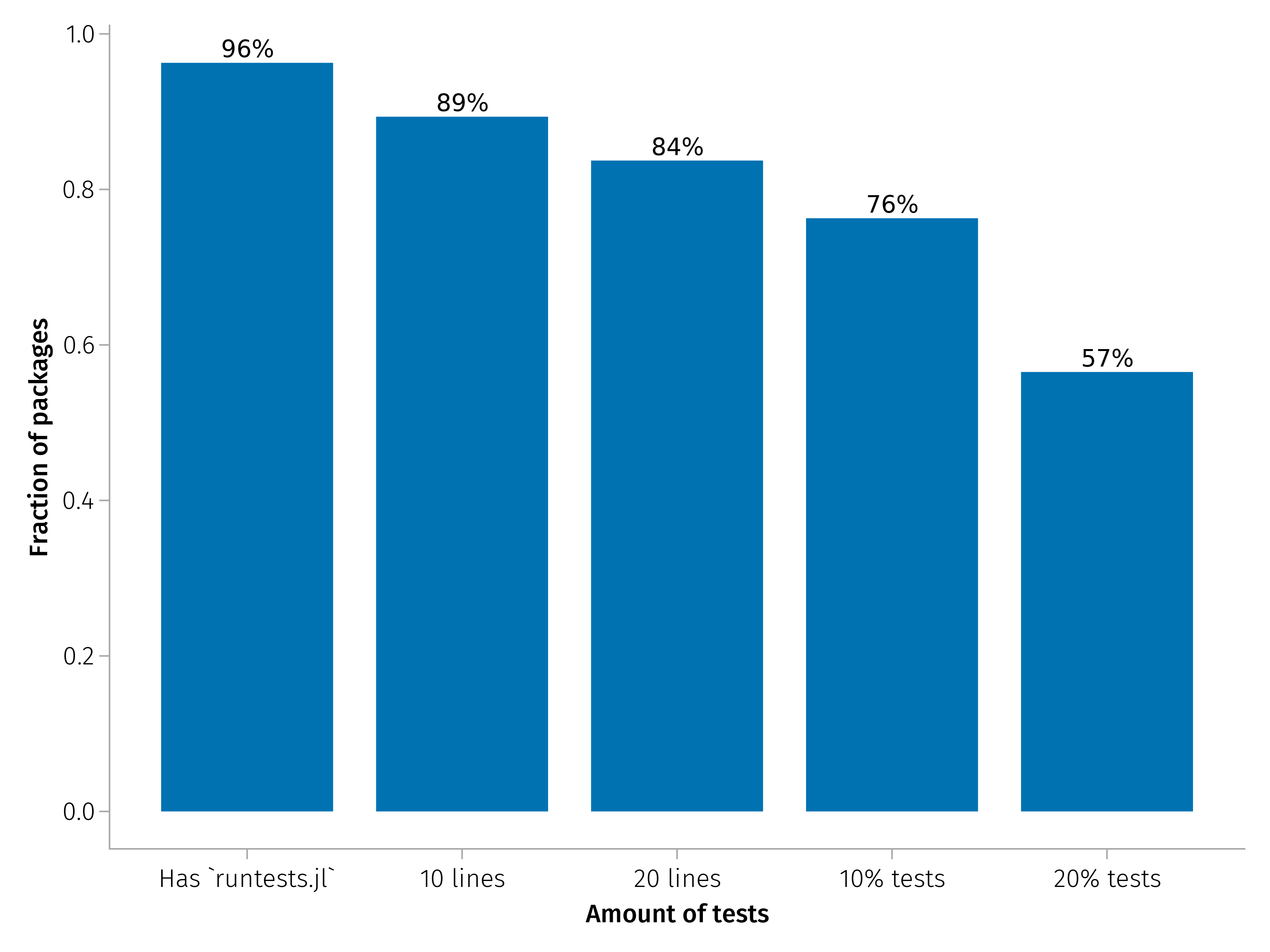 Similarly to what we have seen above for docs, the following chart shows the distribution of the percentage of tests in the codebase of the repository, as fraction of lines of code in the tests directory over the total number of lines of code in the tests and src directories. We can observe that the level of testing is fairly high: 57% of packages have at least 20% of code as tests, while 8% of packages have more lines of tests than of source code. 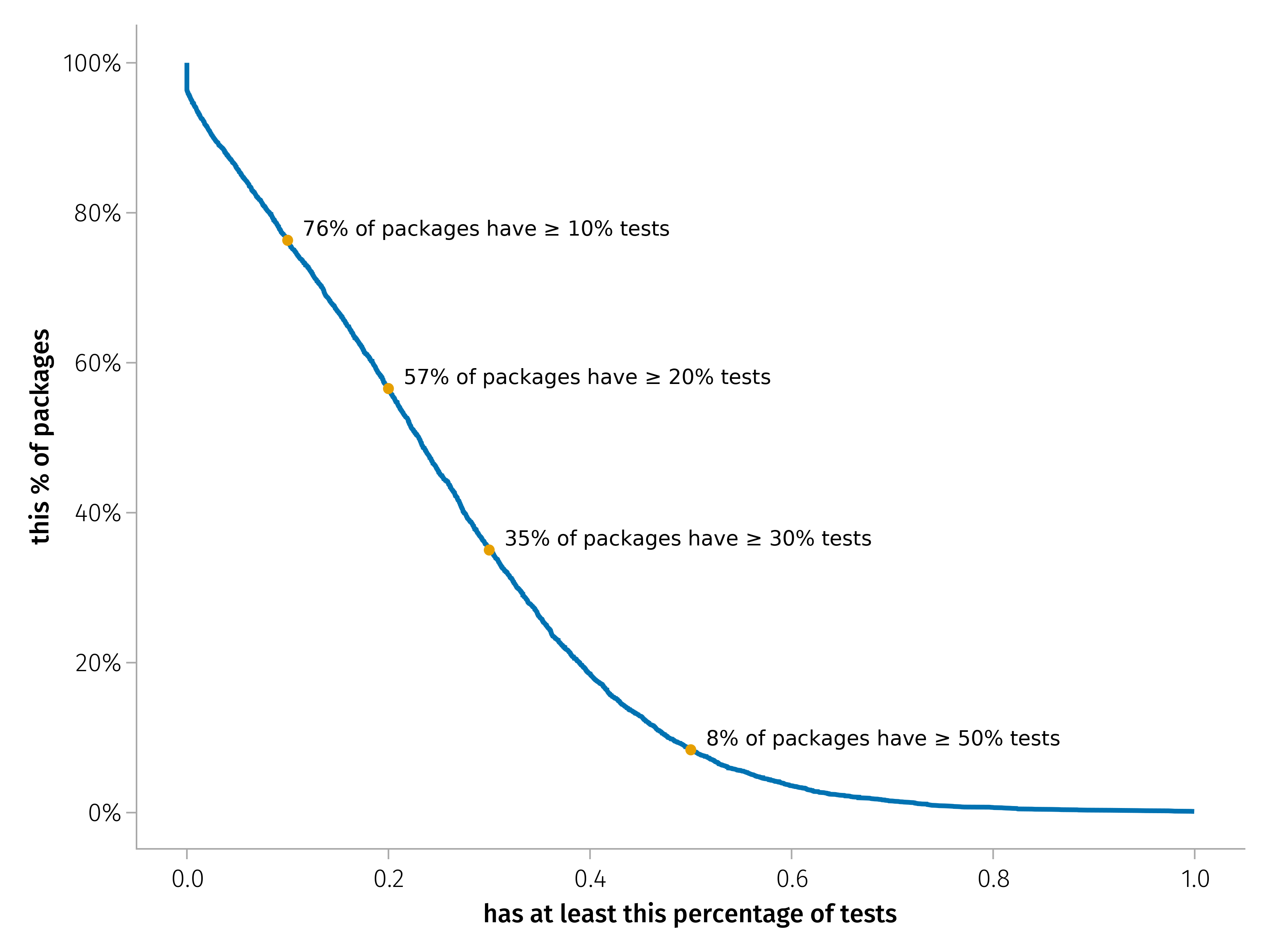 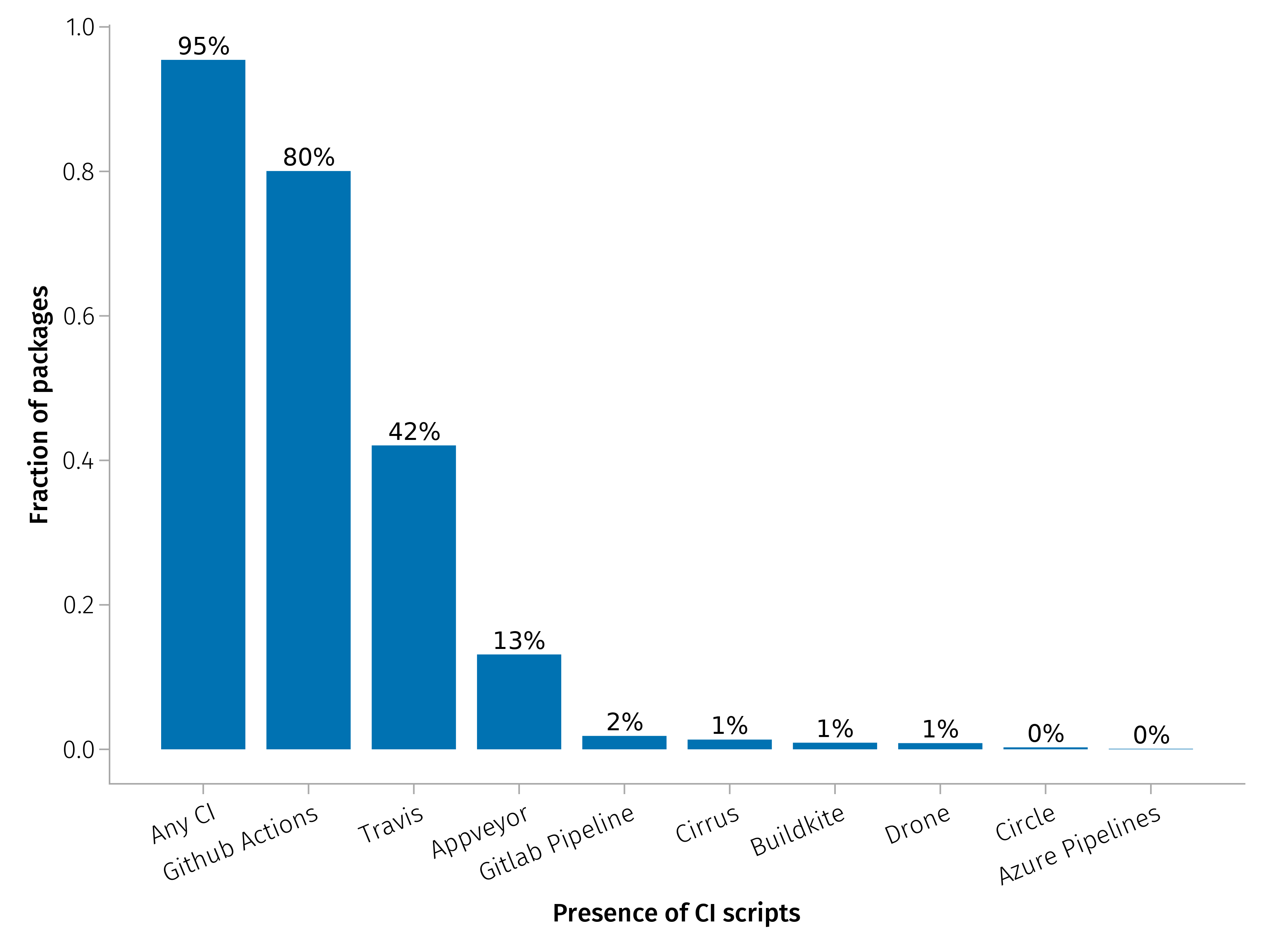 We can take a look at the popularity of CI services over time: a common trend is that GitHub Actions is taking over from Travis and Appveyor, which used to be the main choice for Julia users to test their packages on the most popular operating systems (Linux, macOS, Windows). The decreasing trend for Travis has been exacerbated last year when changes to their conditions made this service less favourable to be used by open-source projects. 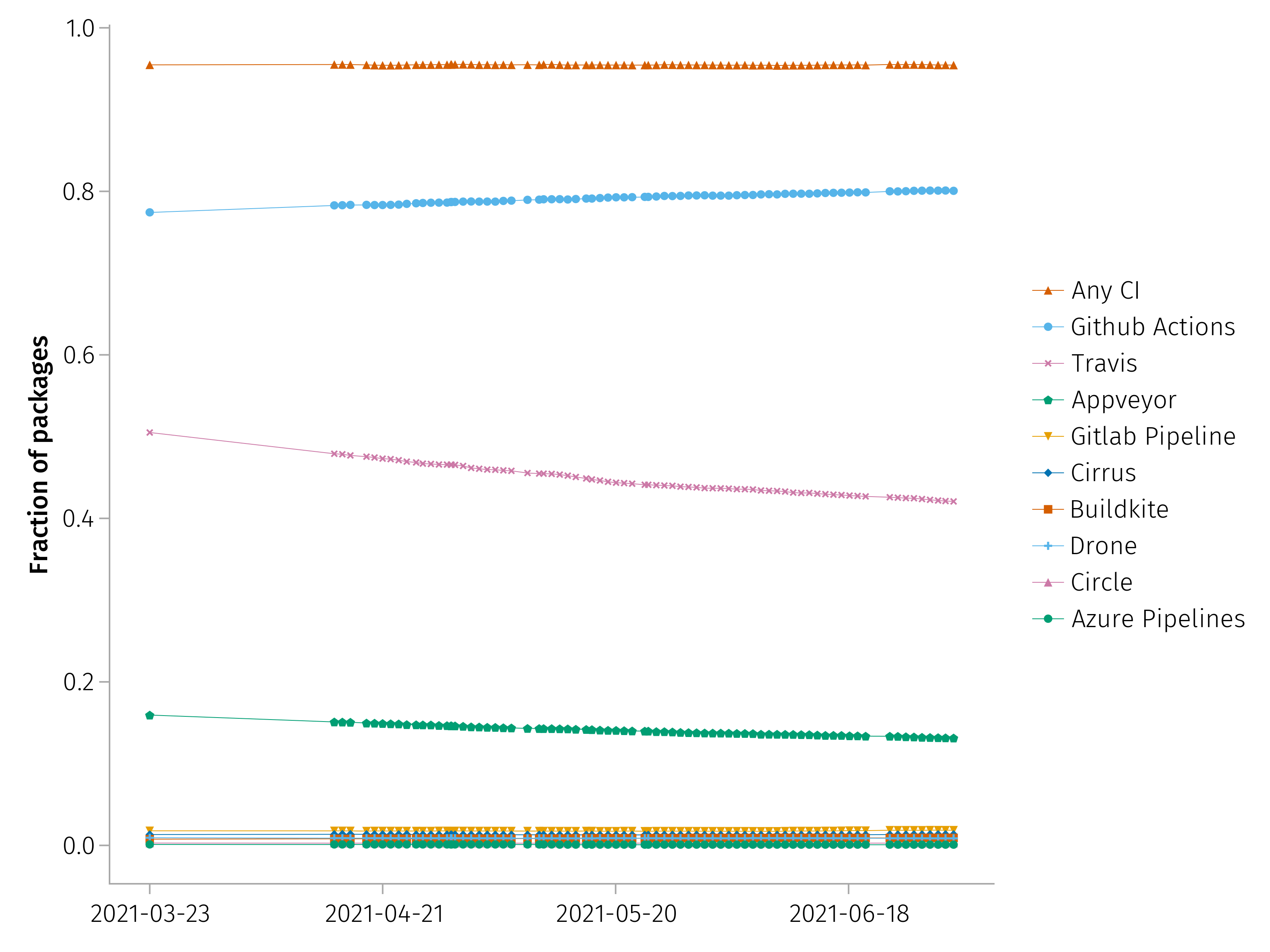 As of 2021-06-27, at least 4931 different users contributed to Julia packages hosted on GitHub, about 250 more compared to two months before. Note that these figures are conservative as they don't include contributors identified as anonymous by GitHub API (for example because they committed changes using an email address not registered in any GitHub account), or any contributions to packages hosted on different websites, like GitLab. 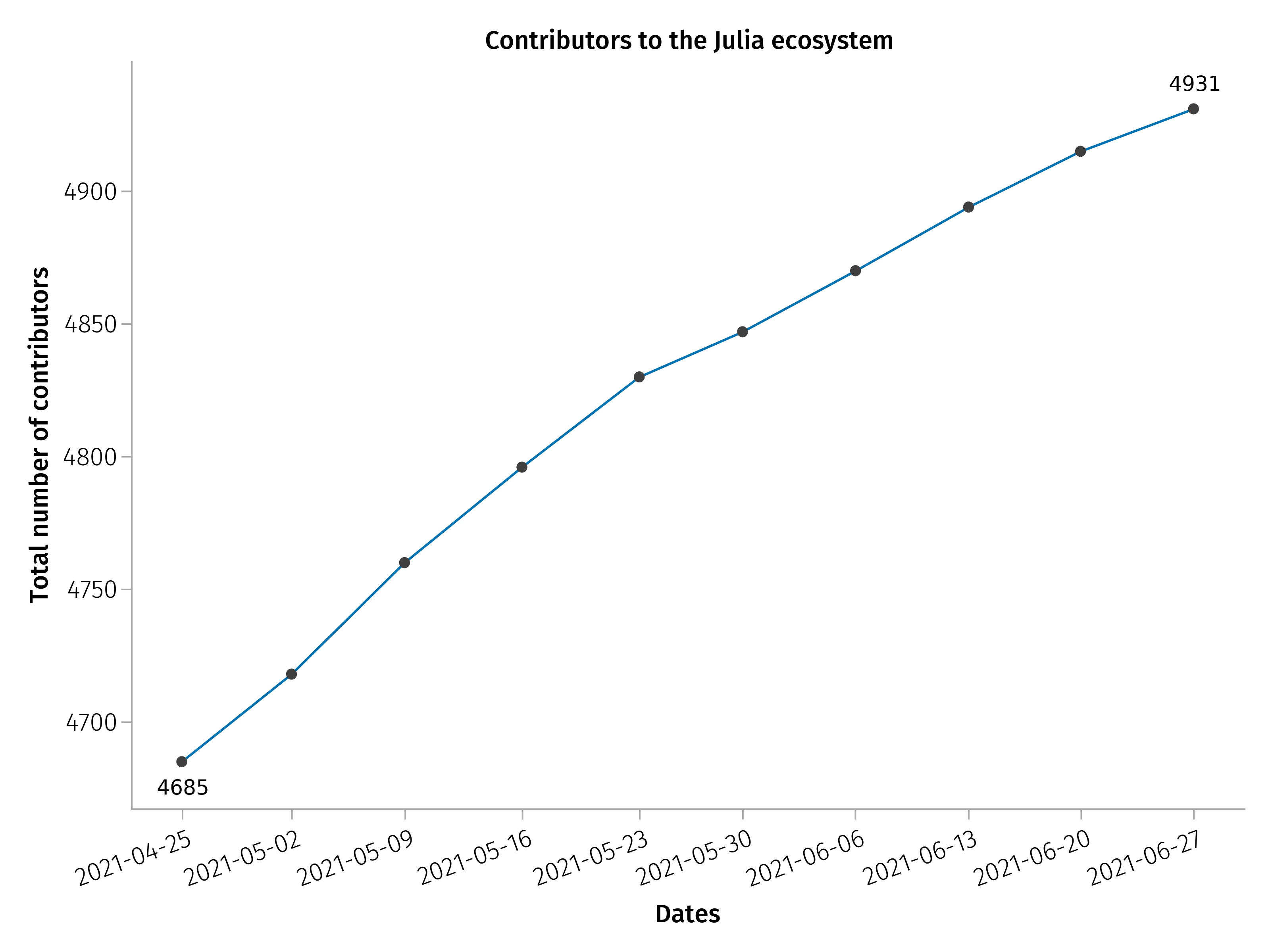 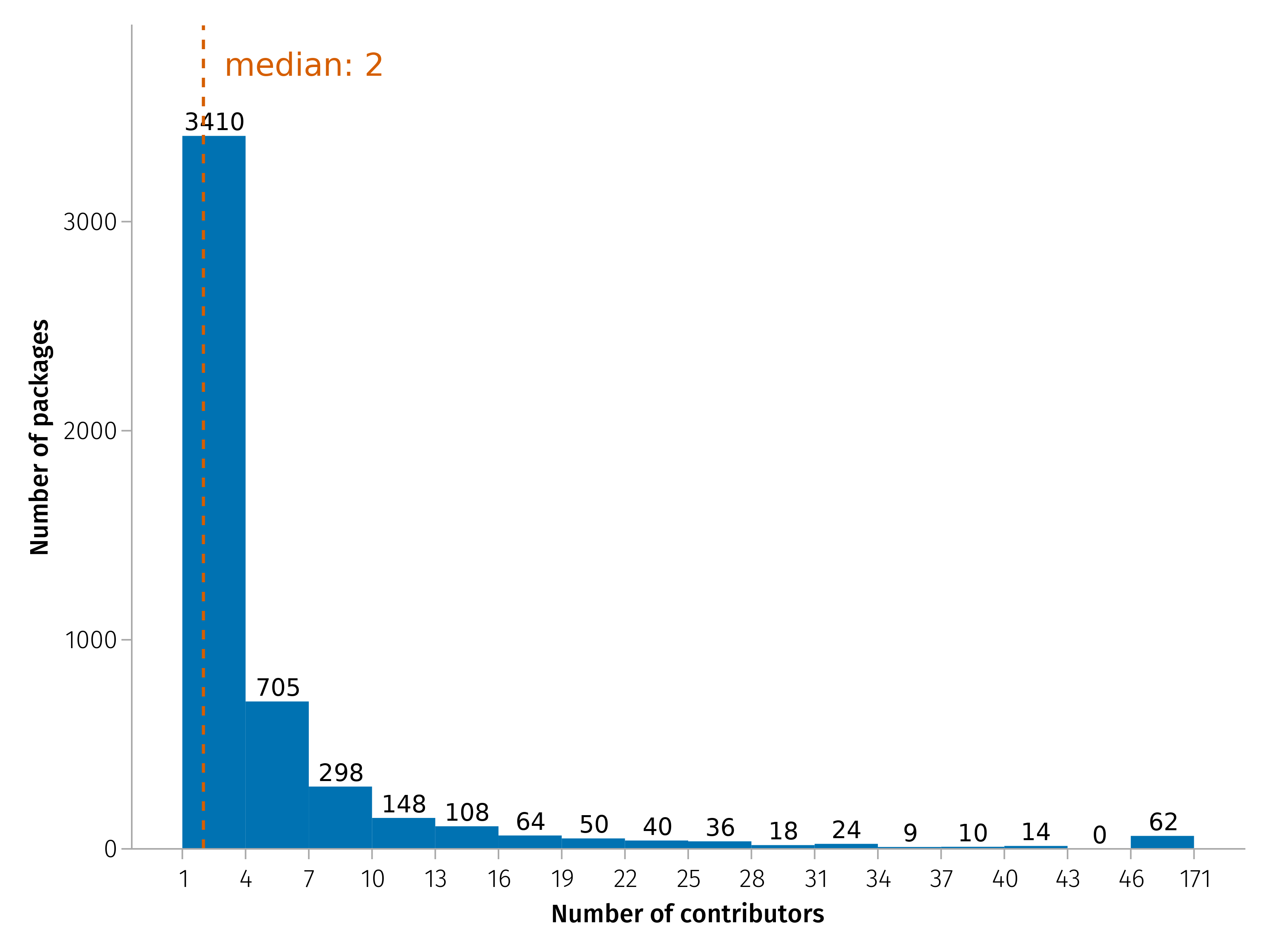 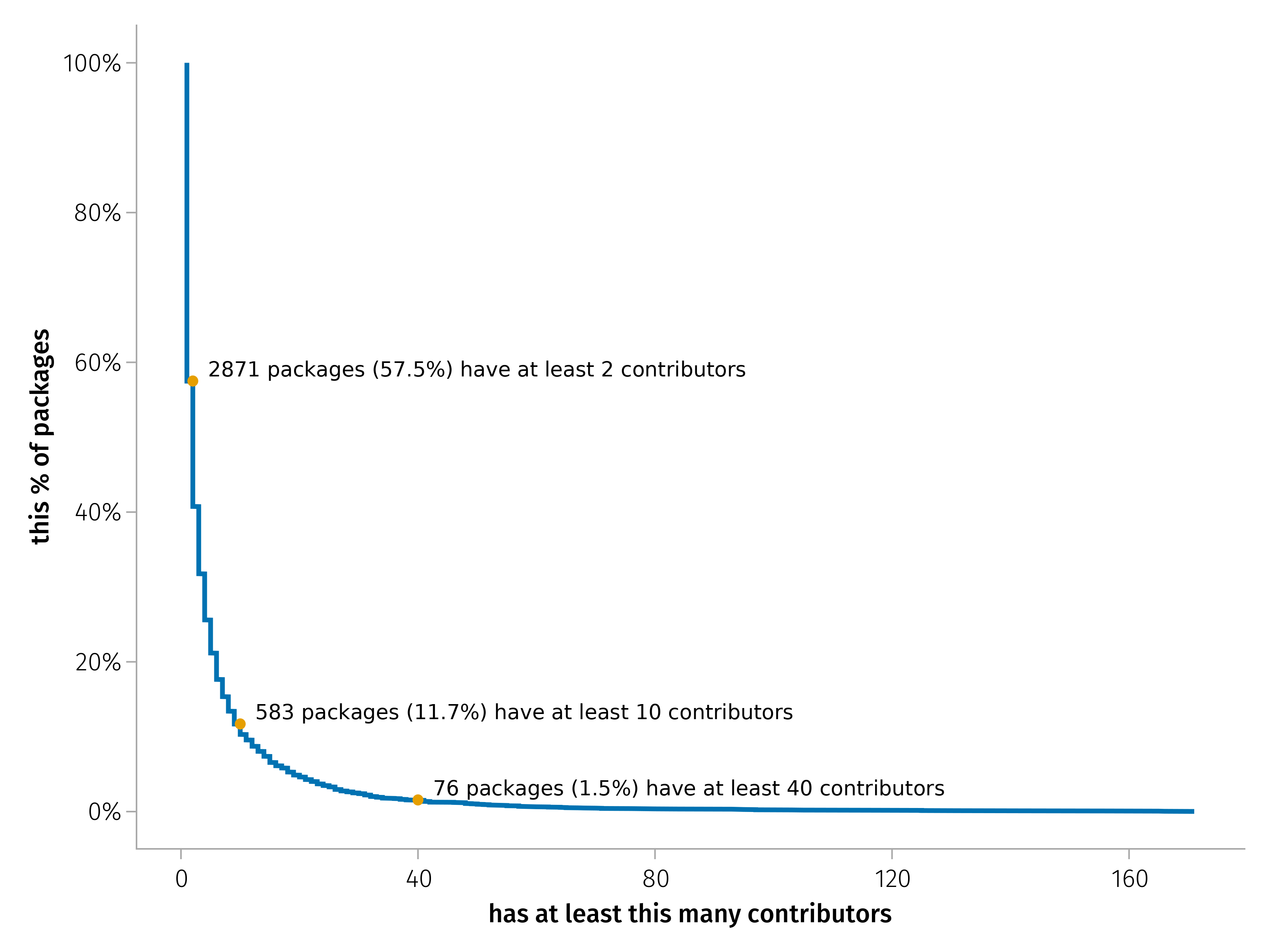 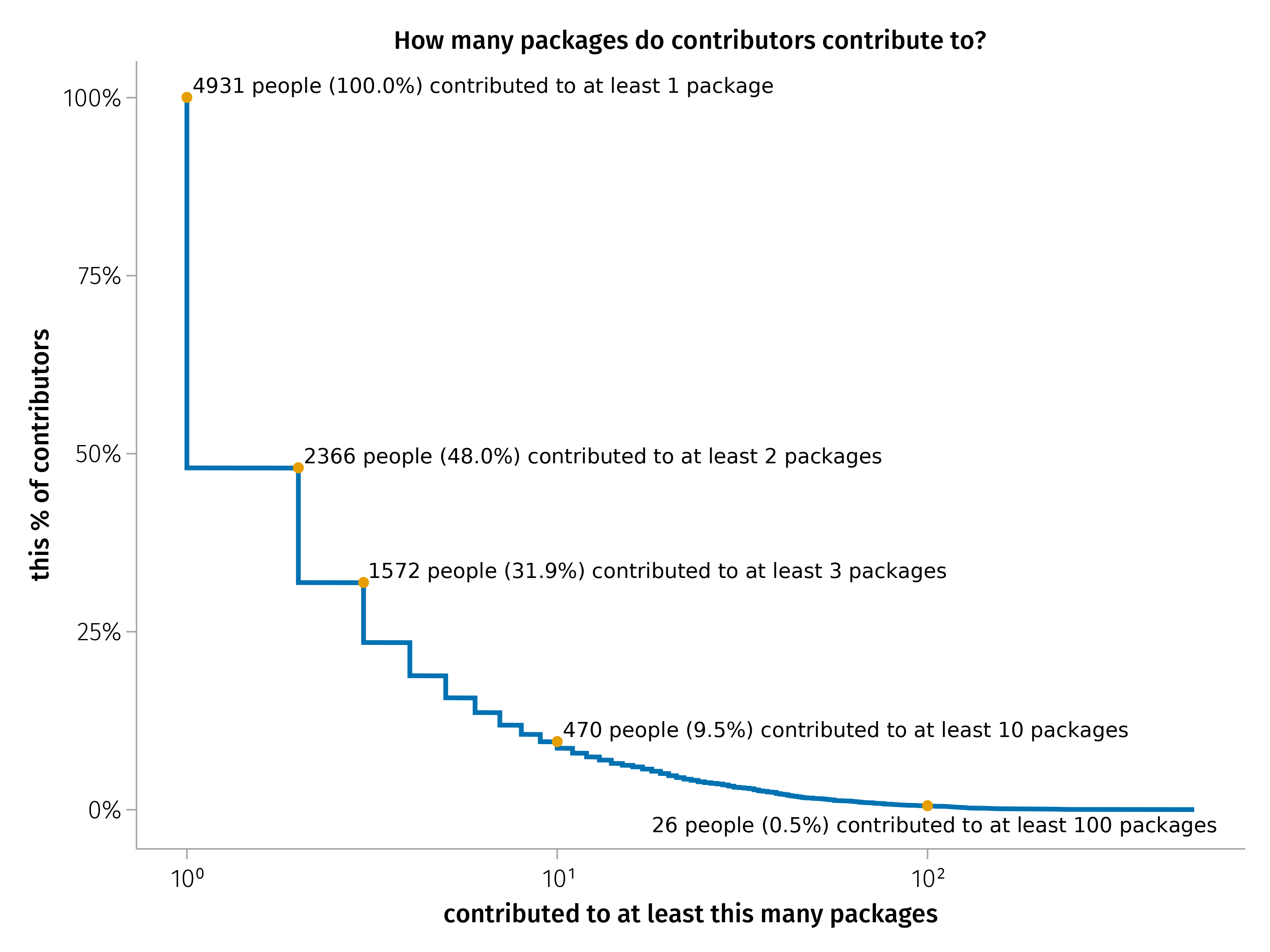 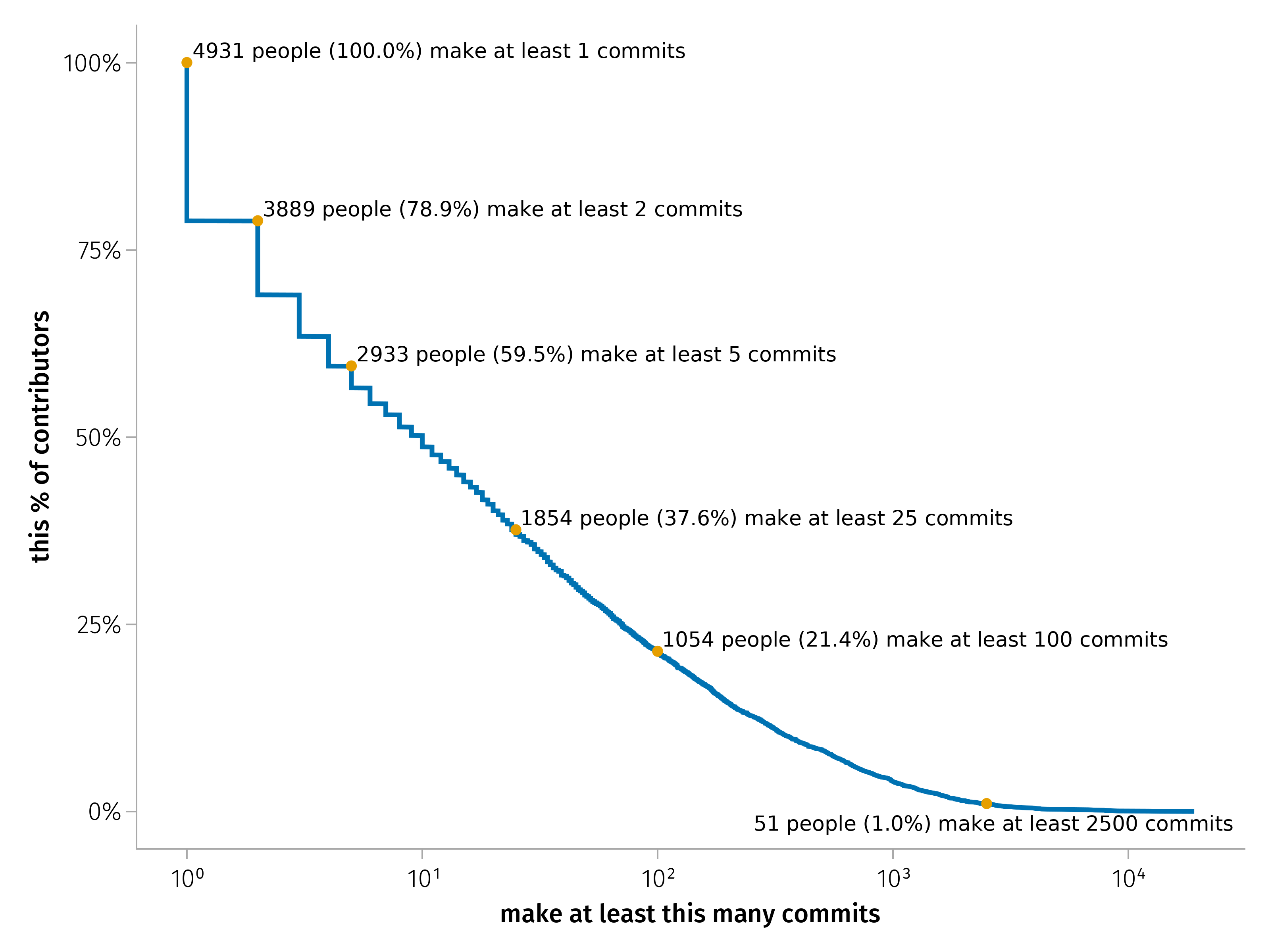 Here are our main findings:

We want to highlight some caveats:

If you have any other metrics about the ecosystem you believe it would be interesting to collect, please get in touch for example by opening an issue in the PackageAnalyzer.jl repository.